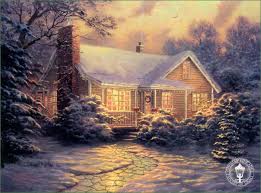 Almost a month has passed since I moved into Diamondleaf and it I must admit, it has been quite the adventure . . . in a sort of plodding boring sort of way.

Today is my first live post from the Diamondleaf, since it is the first day I have internet service! I relayed to my colleague that I do not own a television, my internet was not hooked up, my phone service is not existent inside my dwelling (save for the most unusual six inch square reception area in my parlor), the heat is sporadic and my electricity flickers. She was aghast! “What on earth do you DO?! Read by candlelight?”–Pretty much. I am proud to say I am almost caught up with my reading from April. APRIL, people! That’s horrible. I am still unpacking and painting. Sky blue ceilings throughout! Oh, do not look so shocked, I said before I adore color and white walls make me cry.

I was also adopted by a cat, who may or may not be the neighbors outside cat, the local stray, or (as horrible as it is to think) the previous owner’s of the cottage, who may have just left him. I dubbed the black and white spotted feline “Macbeth.” A nice gender neutral name (if it is a boy I’d call it Mac and if it is a girl I’d call it Beth). The name came about because I am allergic to cats and My Suitor who likes to pop by the cottage is deathly allergic to cats. The first phrase when I saw the cat sitting right in front of the cottage door was “Out, out, damn spot!” Voila! Macbeth! It is also fitting that it is a literary name. S/he likes to kill pigeons and eat them in my backyard. *Sigh* I wave at Macbeth when I see him/her around. Macbeth looks at me cautiously or bored-like, as cats tend to do. I believe Macbeth hangs around, because he is trying to tell me something. My Suitor disagrees and states it is just feline curiosity; “If cats were smart, we all would be dead!”

On my first full day at Diamondleaf Cottage, I went shopping in the morning and accumulated loads of home goods for a shockingly reasonable price. I was rather proud of myself for my sensible haul. I returned to Cottage to warm up some lunch . . . the sweet and sour packet exploded in the microwave. *Deep sigh* This is going to be a trend, I am sure. I am still feeling out the home and its quirks.

I also discovered a bit about the previous owner through his mailings. NO, I did not open his letters! That would be illegal! Besides, I do not wish to pay his bills. From the catalogs and subscriptions, I gathered “Xavier” to be a soccer-playing, Catholic gambler. The man, gets so many solicitations from Casinos all over the world . . . it does make me wonder . . .

I hope you all had a lovely holiday and now that I have been reacquainted with modern age via internet service, my post should be far more regular.

A beautiful family photograph, definitely one for the annual holiday card!

What is the with the wealthy and naming inanimate objects? Their homes, their coaches, and so on. As previously discussed in prior posts, naming something gives a sense of ownership and thus responsibility to a thing (like a child or pet). It is also a means of identification and tracking (surnames for example). While some academics would loathe to admit it, naming reveals the personality and even values of the Namer. For instance, a person who names their daughter Mary after their grandmother, has different (not better or worse; just different) values and personality than a person who names their little girl Holland or Hollynn, because they have some sort of affinity for country or like the sound of the name/spelling.

Interestingly enough studies in Europe have found that a named estate/house/car increases the public’s perception of the value of said object. Thusly, named things tend to cost more. On this side of the pond (as well as globally in a modern sense) this ties in with “branding.” I once read an article in magazine of up and coming actress who was showed a rack of dresses to try on for a cover shoot. She dismissed one as hideously ugly and moved on to the next. The Stylist, in shock, stopped her and explain. “But this is Chanel!!” The actress stopped dead in her tracks and took a second look. “Ooooo! It’s Chanel!” Suddenly, she changed her mind and wore the previously “hideous dress” for the cover. *sigh*

Ah, but I digress . . . naming of estates. It was a means of identification and legacy for the landed gentry in Europe. Often times the name is derived from the owner’s family name, a distinctive feature of the nearby land or building itself, or flora and fauna found nearby. The majority of real estate names are compound words like “Edgelake.” Usually the moniker is followed by

Some names connote the size or the style of said dwelling. Roughly in order of smallest to largest, without repeating from the list above:

In “Aldershot” whence I relocated, the subdivisions have an array of names. Some accurate, others woefully fantastical given the city’s residence is in the desert of Arizona.–Names like Acacia Farms (this place is a bit rural agriculture, so that fits), Desert Meadow (A meadow is a clearing . . . and a desert is . . . uh . . . a dead clearing??? Sounds a bit redundant to me) Highland Manor (Sounds like a Scottish country home! So atypical of middle Arizona landscape) Wildwood (If we had wood in the area it might be spot on, but alas we just have palo verde, palm trees, and many dead shrubs . . . )

I did named my home, because . . . well, I want to! It is a personal choice. It shall not be named in the formal sense like those in Europe which requires legal registration and change of records. I am basically dubbing my place. I wanted something that conveyed provincial glamour and local flavor. As it happens, my street has the name “Willow” in it. . . . so my estate name? Diamondleaf Cottage! Does it not dazzle?!

I always wanted a house-blessing, I feel it brings good tidings to a new domicile. More importantly, after viewing a rash of hauntings on ghost shows, I was more eager to have a blessing to dispel any negative energy left by previous owners.

Home blessings come in many forms, the basis is a sort of prayer. Other ceremonies include salt, holy water, oils, herbs, and incense. Although, in some instances it is consider a ‘cleansing.’ At the very least the person blessing the abode does so over the threshold, however all doorways, windows and property lines are also common. While I believe anyone can do a blessing, many prefer an ordained person of a faith. My Suitor performed the cottage’s blessing prayer with salt over all the exterior doors.

Those of the Christian faith, tend to use passages from Scripture. Other times, it is just a sincere prayer. Normally, people pray for health, wealth, happiness, and fertility. I think some of the best home blessings/poems/toast steam from the Irish. Here is a sampling:

May the roof above us never fall in/and may the friends we gather never fall out.

May joy and peace surround you/ Contentment latch your door/And happiness be with you now/ And bless you evermore.

May your troubles be less/May your blessings be more/ And may nothing but happiness/Come through your door!

May you have walls for the wind/A roof for the rain/Tea beside the fire/Laughter to cheer you/Those you love near you/ And all that your heart might desire!

Bless you and yours/As well as the Cottage you live in./May the roof over your head be well thatched/and those inside be well matched.