First names carried monumental importance and highest level of intimacy during the 19th century. So intimate, husbands and wives rarely addressed each other by their given names. Instead, they referred to one another as Mr. So and So or Miss/Mrs. So and So. Certainly no one outside of the home, unless it was a supremely intimate friend voiced a Christian name. In jest, my brother once asked “A Christian name? What if they are Muslim? Or Buddhist?” Valid question, but the obvious answer given the context and circumstances.

END_OF_DOCUMENT_TOKEN_TO_BE_REPLACED

In the course of my research for 19th Century Modern, I am constantly startled by a single sentence in my readings. The sentence, buried in a long-winded paragraph and mentioned so nonchalantly and blatantly there is no room for interpretation.There are a multitude of examples, the latest; pointing out bathing costume, akin to modern swimsuits, were made of heavy shapeless flannel to turn perverse thoughts toward modesty and to prevent the wearer from getting wet.——–Come again? Upon further research and numerous sources latter, the truth comes to light: The Victorians were fearful of water. They deemed it unhealthy and unsanitary both to consume (which was a legitimate phobia of the era) or to interact with (such as bathing or swimming).

END_OF_DOCUMENT_TOKEN_TO_BE_REPLACED

Each year gives rise to a multitude of entrepreneurs or perhaps more accurately each day sees the birth of numerous organizations somewhere in the world. Some of them endure for shockingly few weeks, but some of them last for century. What causes a company to endure the perilous, shifting climate of economics? How do they maintain their relevance? First, a person must research those companies that have withstood the test of time. Then one can deduce their formulas for success. Or perhaps discover the general rules of triumph comparatively? Here is a list to whet your capitalistic appetite. How many are you familiar with?

Companies established during the 19th century and continue to sustain itself

*Or not. In the age before twitter there was the telegram. Predating the telegram was the good old fashion hand written letter as the predominant method of carry news across long distances. Correspondence was copious as people desperately tried to convey as much information and emotion into a single handwritten letter. Due to the rising cost of mail letters were written cross-wise two or three times on a single sheet to reduce the postage price. In more direct speech, a person wrote a missive and then turned the page 90 degrees clockwise and wrote over the top of the first portion, turned it clockwise again, and again, as need be. Needless to say, reading a letter became as much of a skill as penning one! It must also be noted, succinct letters were counterproductive as the charge was “so high,” so the conveyed information must be worth-while to spend so much. Short, of writing a letter was relaying information to a person who was then entrusted to ride out to  recipient and deliver the speech. This presents a whole host of problems.

Depending on your source the telegraph was invented during the late 1700s, early 1800s. Suddenly, there was a more rapid way to communicate news! Again it was costly, but at the price of speed and distanced traveled it was astronomically faster. The only drawback? One had to be succinct. What on earth?! For a generation who grew up with extensive correspondences, how was one supposed to suddenly become laconic??? With difficulty. Punctuation increase the cost of the message, hence the word “stop” between sentences. Similar to present day Twitter, new jargon and cyphers emerged specifically for the telegraph. Words were invented with Latin prefixes an suffixes attaching themselves to words that hitherto had none, if grammar and correct spelling was to be applied.

It was in these sort of moments where the thesaurus became a trusted companion. What was the shortest way to “little”? Lilliputian?–I do not have the money for that! Diminutive? Surely, not! Petite? That is better, but I am just a poor woman, is there not some other word to use? Short? Oh, yes! Here it is “wee!” Send note to father, “Wee time left do hurry stop.” Now, one would hope the receiver of such a note understood the new rules of telegraph correspondence!

Perhaps on of the more notable examples of the telegraph language, was Ernest Hemingway’s response to his editor’s request for precise accounting of his expenses by telegraphing: suggest you upstick books assward.

*Please note this post was inspired by Wired Magazine’s Dec 2012 article Tweet’s Before Twitter by Johnathan Keats p. 068. I was unable to find a direct link to the full article. 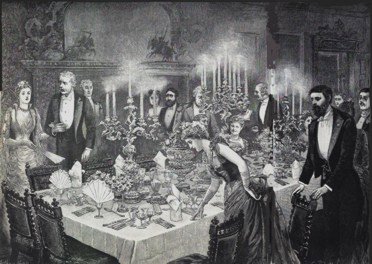 The modern restaurants as we know them today emerged in France during the British Regency era. While food service has been around since ancient civilizations, it normally came in the form of inns geared toward travelers. Prior to the Regency era, food was served on the communal tables. Wait staff and menus were not existent. Customers, of the rooms, served themselves. In the late 18th century, an entire chamber was filled with tables for private “parties.” A server or waiter was assigned to a certain table. Customers were expected to choose what they desired off the menu. A novelty! Likewise, they were expected to pay for each food item, a la carte, without ever having to stay the night. The gall of the greedy! Restaurants catered to the local clientele out of the way of the questionable tourists.