One would hope from the popularity of the BBC’s Victoria television series more 19th century films would be in the works or at least close to completion to slack the public’s thirst for historical dramas, whether they be biographical or fictitious. Alas this does not seem to be the case. In fact, my list of upcoming viewing is rather far off. What is most peculiar is there seems to be quite a few debuting this year, but actual release dates are extremely difficult to come by. Ordinarily, I would only list eight shows or cinematic productions what were soon to debut; as in coming out in the next three months. I am only including four titles, which one does not have a definite opening slot. Perhaps in the next two months, the companies will have the courtesy to make an executive decision for debuting times.

Slated to debut on April 14th, Tommy’s Honour is the story of two timeless dynamic Toms in an intimate, powerfully moving tale of the real-life founders of the modern game of golf. Starring Sam O’Neil of Jurassic Park and The Horse Whisperer fame, Peter Mullan (War Horse) portraying the older Tom Morris, and rising Scottish star, Jack Lowden, last seen in the War and Peace Mini-Series, as the young Tommy Morris. In every generation, a torch passes from father to son.

Expected to be released in theaters on June 30, The Beguiled is a Western drama during the American Civil War. “While imprisoned in a Confederate girl’s boarding school, an injured Union solider cons his way into each of the lonely women’s hearts, causing them to turn on each other, and eventually on him. This is made entirely more believable with Colin Farrell cast as said soldier. Honestly! House hold names, Nicole Kidman, Kirsten Dunst, and Elle Fanning are those lonely women the summary speaks of. To add even more interest to this film, Sofia Coppola adapted and directed it! As a Librarian, I have to add this a book adaption from the novel of the same name by Thomas Cullinan. The movie poster is just scrawling script of the title, to add intrigue, I used Colin Farrell’s best “Mr. Steal-Your-Girl” screen shot here.

Originally, this film was going to open in February, then it was pushed back to June and now it is moved to July 14th. My Cousin Rachel is a novel adaptation by the author Daphne du Maurier. It chronicles a young Englishman’s revenge plot against his mysterious, beautiful cousin, believing she murdered his guardian. But his feelings become complicated as he finds himself falling under the beguiling spell of her charms. Rachel Weisz stars in the titular role, with Sam Claflin (from the Hunger Game series) and Holiday Granger (made famous from her Lucrezia Borgia role) round out the cast.

Now for the thrilling television min-series that will debut sometime this year . . . Brought to you by the CDC and Netflix, Alias Grace is based on the true story of Grace Marks, a housemaid and immigrant from Ireland who was imprisoned in 1843, perhaps wrongly, for the murder of her employer Thomas Kinnear. Grace claims to have no memory of the murder yet the facts are irrefutable. A decade after, Dr. Simon Jordan tries to help Grace recall her past. Filmed in Canada, headed by Canadian actress Sarah Gadon (known for her role in the 2014 movie, Dracula), Zacharey Levi (whom we all fell in love with in Chuck series, but might be more wildly known as the voice and physical inspiration for Flynn Rider from Disney’s Tangled), and Edward Holcroft (previously seen in Kinsmen: The Secret Service and Wolf Hall). Anna Paquin makes an appearance. Yet another cinematic adaptation of Margaret Atwood’s book. Every Friday during the entire month of February my library is hosting Tea Time; a four part series for adults on the cultural, historical, and political aspect of tea during various times and locales. It runs from 3 to 5 pm. The first installment was High Tea concerning the Victorian/Edwardian etiquette, British culture, and history of the High Tea. Participants were instructed to wear fancy hats. We arranged a Skype Session with a one Mr. Christian Elsing, Lobby Restaurant Manager of the Fairmont Empress Hotel, British Colombia, Canada as our guest speaker. He. Was. WONDERFUL! Very bubbly and highly informative! He also discussed the Empress Tea Experience and gave us a quick tour of the Lobby Restaurant. My family and I have first hand knowledge of the Empress Hotel Tea Experience which is why I reached out to them in the first place. If you ever get the chance to go, GO! It is marvelous! These folks managed to get my red-blooded, meat-and-potato, American-football-loving father to drink FOUR cups of tea, try every little sandwich and pastry available, as well as purchasing no less than a dozen boxes of Empress Tea to take back home to friends and family. I learned from Mr. Elsing’s discussion “only peasants took milk with their tea,” as one of the lady’s surmised. In effect, only royalty could afford bone china which can withstand the scalding heat of the hot water, china and porcelain would crack and break under the stress, so cold milk was typically poured to cool the beverage and salvage the cups of non-royals.

Indian Tea Company was the second installment of our Tea Time series and we had three ladies from India come to speak and demonstrate how to make Chai tea. It was fascinating! Indian Tea is considered “young” and did not really catch on as a daily thing until the 1920s, years after British colonization. Different areas of India, take their tea differently some with black pepper, others with brown sugar, etc. To cool off the tea, Indians pour it highly elaborate manners or constantly switch the liquid from one cup to another. There is actually am Indian tea ceremony tied into the vetting process of arranged marriages. All of it was so interesting. Nobody wanted to leave! The presenters nor the audience!

This Friday, in partnership with the Daughters of the American Revolution (DAR), we will be having American Tea Party: Politics and Tea during the American Revolution. The DAR Ladies will be in costume to talk about the atmosphere leading up to the Boston Tea Party as well as give a brief history on different types of tea pots. Next week, we will be sitting in on For All the Tea in China: Chinese medicinal tea.

Family and friends have asked me why I decided to offer this at the library, to which I replied with a shrug “Why not?!” While I am not a huge tea drinker, I will drink it on occasion, I honestly just like the pageantry and etiquette required for these daily ceremonies. As far as I figure, if I like something, then there is at least one other person on the planet that shares my interests. So far this approach to library programming has served me well. It makes it fun! 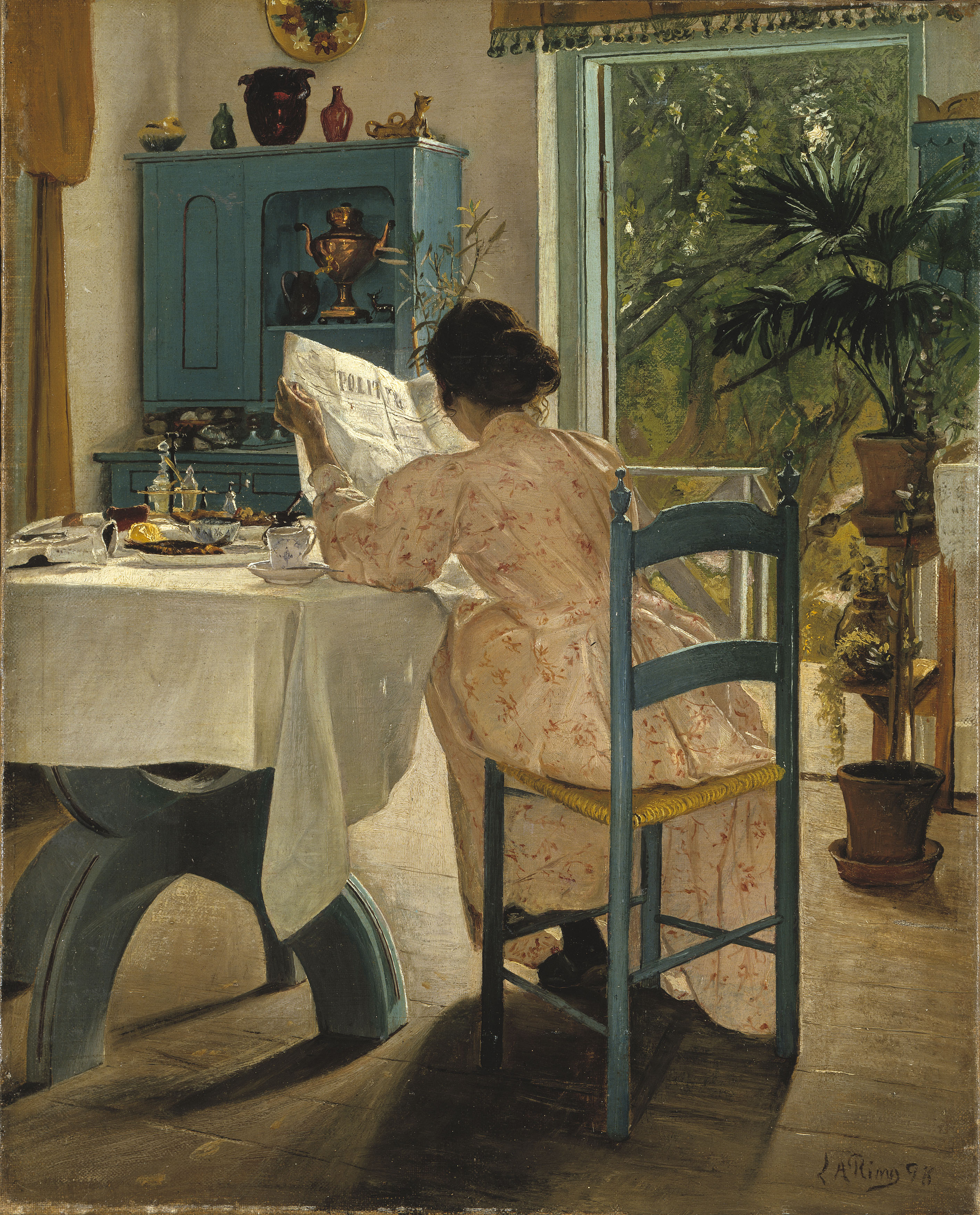 Breakfast with the Morning Newspaper by Laurits Andersen Ring, 1898

This month is just blurring by! Really? A fortnight already?! Heavens to Betsy, time certainly flies. Luckily, this does not pertain to our first news post of the year at 19th Century Modern. Naturally there are some political tie-ins with America’s Presidential Inauguration by peeking into the “Trump of the Past.” It seems marginally optimistic. Only history will tell how our new President did. In the same vein, an article on mini-bios (a fan favorite topic) of 19th century female pioneers made the list. As a micro-shopping post in its own right, there is a curated short list of Jane Austen inspired candles from various companies to include as part of your new Hygge routine. Another literature inspired headline incorporates innovative library art. There is also a vignette on half a dozen scandalous news of the 19th century. News on News? This is getting practically, meta! An entire 19th century village for sale, a piece on the famous selfie obsessed celebrity from the 1800s and a special time capsule reveal, round out the other offerings this January.