As a Librarian I am constantly coming across interesting books via donations, read a ridiculous amount of book reviews and quickly make decisions based on collection criteria in hopes it will be a highly checked out title of great use or interest to our City’s population. Thus said, every librarian, will occasionally buy books of personal interest to them. Any one that says otherwise is lying. To my credit, I seldom do this since my interest are not “popular” in my area, but I still try to purchase titles that I know will be checked out by other people, besides myself. Not too long ago I purchased a book on the history of how some of everyday household item were first invented. Below is a partial excerpt from the book.

*Citation listed at the end

“[King Camp Gillette] came from a family of creative dynamos . . . “My impulse to think and invent was a natural one,” Gillette wrote in his memoirs. . . .While [his father] never hit it big commercially with his tools, he urged King to keep at it: “Just invent something that the people need, and you’ll make yourself wealthy for life. Keep looking. You’ll hit upon something that a lot of people want.”

In his twenties and thirties, Gillette wandered-both physically and intellectually. . . . Marriage and a child on the way kept the would-be philosopher grounded. His career as a traveling salesman put food on the table. He was good at it.

As Gillette told it in his company’s history [William] Painter steered him toward the practical and the disposable. . .

Gillette’s famed epiphany  that led to the creation of the ubiquitous safety razor struck in 1895 as he stood in front of his bathroom mirror: “When I started to shave, I found my razor dull, and it was not only dull, it was beyond the point of stropping and it needed honing, for which it must be taken to a barber or cutler.” . . .

He “knew practically nothing about steel.” . . .  Experts told him that putting an edge on a sheet of steel couldn’t be done.

But as William Painter had counseled family, friends, and colleagues: “The only way to do a thing is to do it.”

Gillette continued to work for Crown Cork & Seal while he conducted experiments, sought financial support, and solicited technical help in perfecting his blades. . . During his crow-cap business trips , he met clients who referred him to MIT-trained chemist and mechanical genius William Nickerson.

Nickerson had more than one hundred patents to his name. “He is an inventor by nature,” a scientific journal wrote, and “his genius consistently running in the direction of producing something new and better in the industrial arts.” . . At first, he turned Gillette down . . .”I was a dreamer who believed in “the gold at the foot of the rainbow promise and continued in the path where wise ones fear to tread, and that is the reason, the only reason, why there is a Gillette razor today,” Gillette reflected.

. . .Meanwhile, Gillette scrounged up investors and incorporated the safety razor company bearing his name. He and his representative recruited twenty investors to pitch in $250 each for 500 shares of the company per investor. Their lawyer ensured that the patent application would be an “airtight instrument against infringers.”. . . 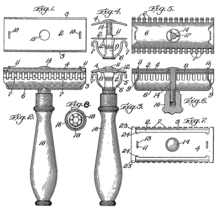 In 1904, Gillette received his breakthrough patent. Five years later, thanks to an aggressive marketing and promotional campaign that put his face on every package, the once-struggling bottle cap salesman was a worldwide, household name. Nickerson continued to innovate, inventing an automatic blade-honing machine a decade later that dramatically improved the company’s manufacturing efficiency and productivity.

The next year, Gillette rolled out the first-ever razor designed and marketed specifically for women. It was called the “Milady Décolleté Gillette.” . . . A 1915 newspaper advertisement proclaimed that the “sleeveless evening gowns” had made “insistent demand for a smooth skin.” The fourteen-karat gold-plated razor came encased in a “velvet and stain-lined French ivory case” of “dainty size.” . . .

After a long battle with intestinal disease, he died in his sleep at a ranch he had built for himself and his family in Southern California in 1932. . .

The serendipitous introductions of Painter to Gillette and Gillette to Nickerson-all lifelong tinkerers who turned their dreams in practical realities-underscore the importance of expanding your creative orbit You never know who might be of help unless you expose as many people as possible to your ideas, failures, and aspirations for success. Self-sufficiency never means self-containment.