Cows in the Field by Walter Frederick Osborne, 1895

Happy Saint Patrick’s Day! If you chance to have a little extra green (the beer, not withstanding) and are willing to part with it for a wonderfully Irish experience, look no further than this short list! It may seem like a bunch of randomness, but I assure you all the things listed have their roots in the Emerald Isle. It is worth the green, if you got the means! Take a gander at these 19th century modern-esque wares. All photographs are linked to their shopping site, unless otherwise stated that particular item is not for sale.

Who knows when the Irish started dancing? But the in 18th and 19th century dance masters were circulating the continent and nearby islands and introduced such forms of the Quadrille. From a combination of native dance, quadrilles, and lack of space for free movement a lively yet rigid dance evolved. And like any dance, it requires a pretty dress. Here is a jaw-dropping modern example:

When one thinks of an Irish hat, they more than likely think of the jaunty top-hat-looking-thing that “all leprechauns” surely wear. In actuality, the Paddy Cap (or as we call it here, in America, ‘The Newsboy’) is really the hat of choice for many Irish men. The company represented below also happens to have been established in 1892. Yaaaay, Victorian era authenticity!

Claddagh rings and Celtic crosses aside, many people’s idea of Irish jewelry stops and ends with Emeralds. Fitting, but I (recently, sad to say) discovered baubles native to “only” Ireland. Bogwood jewelry! Have you even heard of this?! I was not aware of such things until researching for this post. Good heavens! Directly from Wikipedia (the most reliable source of information online–so says every student on the planet) ” Bog-wood is a material from trees that have been buried in peat bogs and preserved from decay by the acidic and anaerobic bog conditions, sometimes for hundreds or even thousands of years. The wood is usually stained brown by tannins dissolved in the acidic water. Bog-wood represents the early stages in the fossilization of wood, with further stages ultimately forming lignite and coal over a period of many millions of years. Bog-wood may come from any tree species naturally growing near or in bogs, including oak, pine, yew, swamp cypress and kauri. Bog-wood is often removed from fields etc. and placed in clearance cairns. It is a rare form of timber that is “comparable to some of the world’s most expensive tropical hardwoods.”

&amp;amp;amp;amp;lt;style type=”text/css”&amp;amp;amp;amp;gt;.vi-hide-mImgThr {display: none;}&amp;amp;amp;amp;lt;/style&amp;amp;amp;amp;gt;&amp;amp;amp;amp;lt;img id=”icImg” class=”img img400″ itemprop=”image” src=”http://i.ebayimg.com/images/g/hVEAAOSwYlJW6awR/s-l400.jpg&#8221; style=”” clk=”” alt=”Large-antique-Victorian-c-1890-carved-bog-oak-brooch-pin-for-repairTrue Celtic harps can be found “all over” Great Britain. It is more triangular in nature. The one below ain’t one of them. However it is a harp from the early 19th century and costs a pretty penny.

Ahhh, whiskey, the water of life! Tullamore Dew is one such brand that has been around since 1829 manufactured by William Grant & Sons. Some joke, to the Irish, whiskey is merely “milk.” What a wonderful night-cap.

As a Librarian, I had to include a book by some Irish-heritage author. Of course. However, I expanded on the whole March being Women’s History month and instead decided on The Wild Irish Girl by Lady Morgan Sydney, first published in 1806. This edition is not for sale. 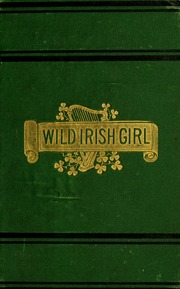 Since I am not Irish, these March post can be a real struggle as I stretch the theme. However, books aside, I believe little pups take the cake. . .  Or in this case, really big canines. Enter, the Irish Wolfhound; one of the largest breeds of dogs, from just sheer height. Yes, yes. I know there are other larger and taller breeds, but these dogs are beautiful as they are graceful. They were also first recognized by the American Kennel Club in 1897 (Because Yaaaaay, Victorian era!). They are known for their calm and dignified personalities and are non-aggressive by nature. Little fella not for sale. And lastly, if you recently bludgeoned a leprechaun and are in quick need to spend the gold before he regains consciousness, might I suggest hiding out in Liss Ard Estate? In American terms, it sits on 163 acres of land and includes 40 acre private lake . . . because, you know, why not? It boast 25 main rooms and numerous guest cottages (numerous, do you hear, people?) It is located in Skibbereen, County Cork, Ireland. If the rainbow doesn’t end here, I don’t what to tell ya!