Europe, “where history comes from” or so it is said. Of course, the I say ‘history’ I mean the 19th century; my favorite hundred-year span in Time. In Vienna, Austria, the 19th century got off to a turbulent start. During his world building years, the great Napoleon Bonaparte had his French troops twice occupy the capital of Austria in 1805 and 1809. The Holy Roman Empire was dissolved and Franz I was forced to abdicate his position at the head of it by the hands of Napoleon.  In 1810 Napoleon takes the Habsburg archduchess Marie-Louise as his second wife, married by proxy. That was just the first decade!

The Viennese treasury went bankrupt the following year from all its military spending against the French Revolutionaries. After Napoleon’s first defeat, The Congress of Vienna redraws the map of Europe. Klemens von Metternich restored the pride and influence of his beloved Austria in 1815. The following thirty years was a time of peace and another Golden Age of Austria burgeoned. From this, the Biedermeirer period flourishes thanks to the bourgeoisie middle class encouraging the culture of architecture, painting, music and literature. Advancing technology and the start of the Industrial Revolution  changed the skyline of Vienna. In 1832 the first steam ship company was created to navigate the Danube River. Later the first railway line opened the same year Queen Victoria ascended the throne over in England. 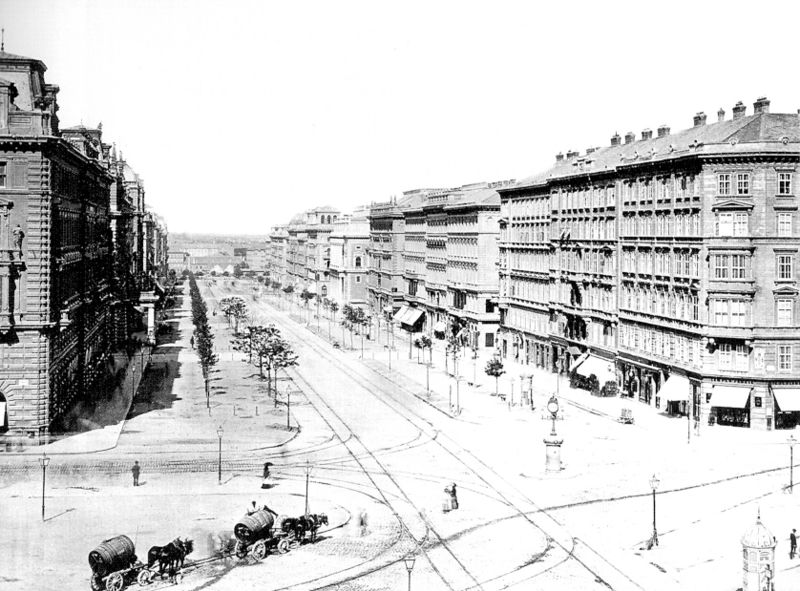 But peace was not for everyone, nor did it last. National politics all but erased civil rights, favored a police state, and the economy was all about profit from industrialization at the expense of the workers. In 1848 a violent revolution erupts, not just in Austria but all over Europe. Absolute autocracy is imposed and ushers in the now 18 year old Franz Joseph I to the seat of power, for which he will remain for the next 68 years! Six years after ascending the throne Franz Joseph I married the 15 year old Bavarian Duchess Elisabeth. An explosion of artistic development rejuvenated the capital starting with the Ringstrassenzone. It was part showcase of the empire and part practical, as a replacement of the original city walls.

In 1862 the flooding of the Danube, inspires the city to reconfigure and regulate the river. During the same year the first public city park in Vienna opens: Stadtpark. Vienna became a glitter gem in the crown jewels of Austria. Theaters, coffeehouses, concert halls, palaces and homes were well lit, clean and maintained. A town hall was built. Even the water supply was improved. In 1867 Hungary and Austria become the Austro-Hungarian Empire. Two years later the Wiener Staatsoper/Vienna State Opera House with its Romantic Realist paintings on the walls opens with Mozart’s Don Giovanni.

Devastating news hit the royal family 1889 when the heir to the throne was found dead under mysterious circumstances with his 18 year old mistress. Almost ten years later the Empresses would be assassinated on the bridge. By 1914 the assassination of Arch Duke Franz Ferdinand, the heir to the Habsburg Empire, sparks World War I.

*Paraphrased from Frommer’s Vienna and the Danube Valley, 2009