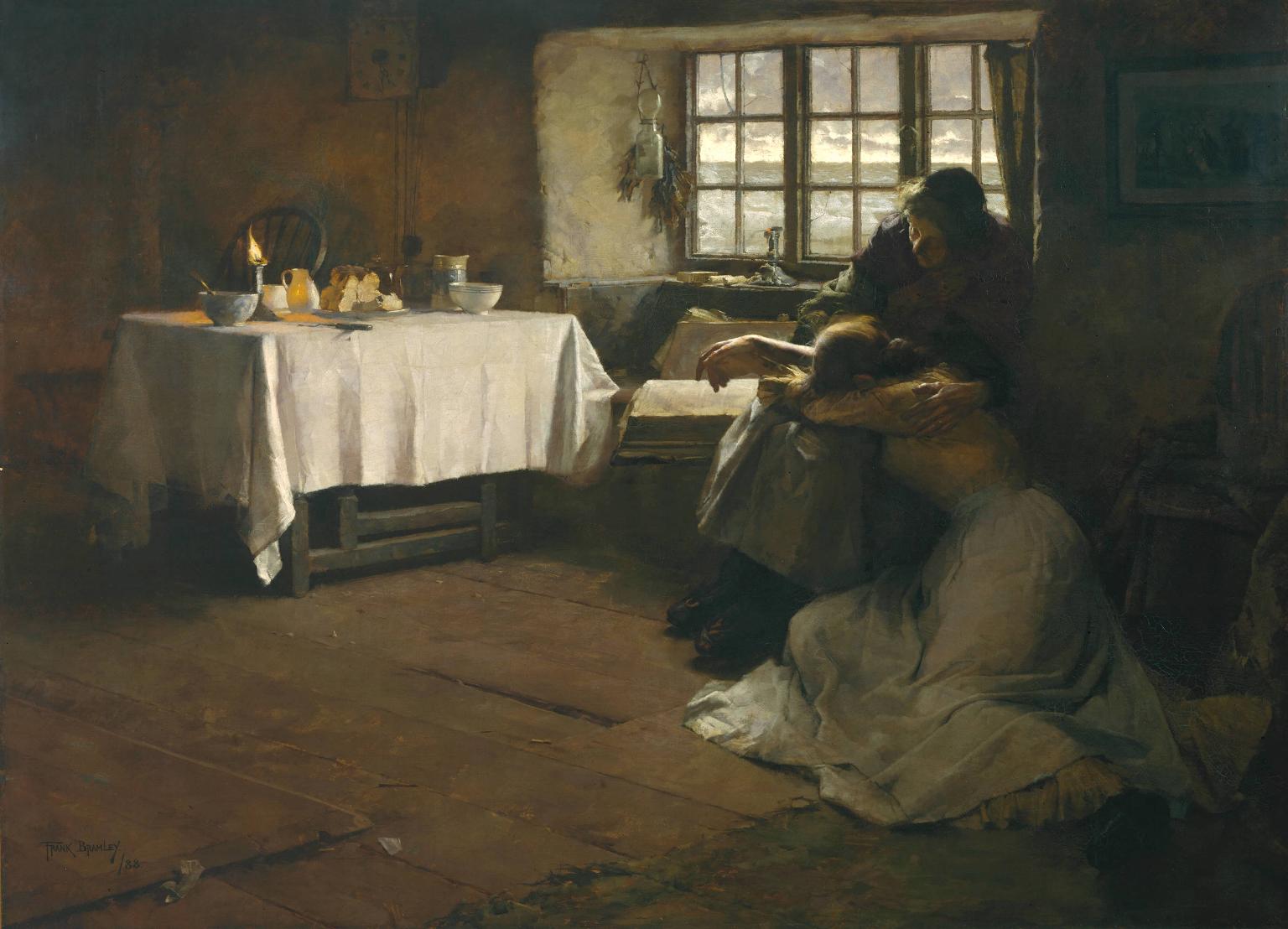 A Hopeless Dawn by Frank Bramley, 1888

Broken engagements, they have been around as long as marriage has existed. The perception of the woman from a broken engagement has shifted with the times, but I guarantee it was no less painfully and gut-wrenching as  one might experienced today. Historically, a scholar on the topic (of which I am not) has to look at the perception and ideology behind Marriage in a given context before the severity of the broken engagement can be understood.

During the 19th century Marriage was still viewed as a business merger, with the understanding the couple liked each other on some small level. This is more true of the upper echelons of society, but obviously enforced throughout all strata. “Traditionally people viewed marriage as a financial arrangement, where affection, if it is developed, came only after the couple and their families had assured themselves of the economic and social suitability of the match.” Thus said Nancy Astor, who married into the prominent 19th century business family, has been quoted saying “Every woman marries beneath her.” In essence, no man is ever good enough for a woman, there is no absolutely “perfect” man out there for each woman.

In the Victorian era, and centuries previous, a woman’s “role and security in life depended on marriage.” Marriage was entwined with the prevalent 19th century societal notion of a woman’s femininity; what it means for “her ideal role in society, sexual relations, and the family. . . ” Marriage was Success, the brass ring for a woman to say she had arrived, that she was desirable, she now had a backing and a name.

“From at least medieval times until the early 20th century, a man’s promise of engagement to marry a woman was considered, in many jurisdictions, a legally binding contract. If the man were to subsequently change his mind, he would be said to be in “breach” of this promise and subject to litigation for damages.” Oh how part of me would love to sue for emotional damages . . . but I find it so petty, vindictive, and milking the man for money; which is precisely what I am trying to avoid in my own personal situation.

“Valid engagements could be broken without penalty by either party upon discovery of significant and material facts, such as previously unknown financial state, bad character, fraud, too-close blood relations, or the absolute physical or mental incapacity of the betrothed. Impotence, sterility, criminality, and alcoholism also formed valid reasons to end an engagement.”

Legally speaking the theory behind the Breach-of-Marriage tort was “based on the idea that a woman would be more likely to give up her virginity to a man if she had his promise to marry her. If he seduced her and subsequently refused marriage, her lack of virginity would make her future search for a suitable husband more difficult or even impossible. In the 18th and 19th centuries, the main factors were compensation for the denial of the woman’s expectations of becoming “established” in a household (supported by her husband’s wealth) and possible damage to her social reputation, since there were a number of ways that the reputation of a young never-married woman of the genteel classes could be damaged by a broken engagement, or an apparent period of intimacy which did not end in a publicly announced engagement, even if few people seriously thought that she had lost her virginity. She might be viewed as having broken the code of maidenly modesty of the period by imprudently offering up her affections without having had a firm assurance of future marriage.”

It is noteworthy to point out “long engagements were common for poorer couples in the Victorian period” where as the upper classes had extremely brief courtships and very short engagements, in effort to churn out success. The longer the engagement, the less likely it was the couple would make it down the aisle due to the stress and tension of the situation. I wish I knew that previously before I settled on a 16 month engagement, which incidentally falls under what is considered the average length of Modern engagements for 12-18 months.

‘The husband was expected to be older than the wife; ideally by three to seven years, since women were supposed to age faster than men.’ This was the reverse of my own situation, where I was seven years his senior. A first; courting a guy younger than me. Interestingly enough, of my three relationships all the men I have courted all had mothers who were significantly older than the father . . . unusual . . . Often times, the  age difference came into play where the man could not reconcile this age over the girl (perhaps old enough to be her grandfather, etc.) since by the 19th century grossly large age differences were frowned upon. Although, many a girl did not mind. If she had honest affection for him and she treated him well, age was a bit inconsequential. Then there are other girls who purposely married much older men, in order to come into a better financial situation quicker.

But for whatever reasons the couple was to be married, a broken engagement is the crushing emotional experience having one’s hope and dreams shattered in the most literal sense. It does quite a number on the self-esteem and the reputation. I can honestly empathize with anyone who has suffered from a broken engagement.