The General Store, from “The Book of Shops,” by Francis Donkin Bedford, 1899

Mother’s Day has passed, here in the United States and Mexico, however a belated gift is better than no gift at all. Honestly, mothers do not care what day you choose to cherish and gift them with happy surprises. Inspired by the current issue of Good Housekeeping Magazine, in and of itself a 19th century established publication. Below are items any 19th century modern mother would be proud to have. The bits below are either antiques, the company was established in the 1800s, replicas, or inspired by the 19th century.

First, Dear Readers, did you know Avon Company was created during the Victorian era?! I did know this! How do I not know this?!

David H. McConnell didn’t originally intend to create a beauty company. A traveling book salesman, he founded Avon in 1886 after realizing his female customers were far more interested in the free perfume samples he offered than in his books. During his bookselling days, McConnell had also noticed that many of his female customers were isolated at home while their husbands went off to work. So he purposely recruited female sales Representatives. McConnell believed they had a natural ability to network with and market to other women, and a passion for his products. At a time of limited employment options for women, the Avon earnings opportunity was a revolutionary concept. It marked the start of the company’s long and rich history of empowering women around the globe.

If Mommy, Dearest has more of a shoe fetish than an obsession with facial products, I always recommend American Duchess. Always. The Renoirs are looking especially promising. 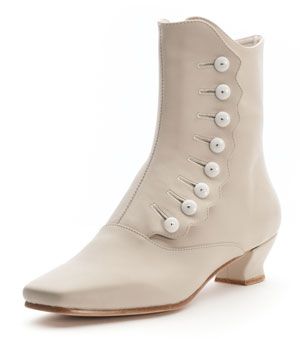 Fashionistas, aside, your mother just might be a neat freak. Invest on her behalf in a truly 19th century modern appliance: the Bissell vacuum cleaner. Again, Bissell is another company that got its start in the 1800s.

In 1876, Melville R. Bissell and his wife, Anna, owned a small crockery shop in Michigan. Because they were constantly cleaning sawdust off the carpet of the shop (know the feeling?), Melville invented a unique carpet sweeper and patented it. . . . When Melville Bissell died in 1889, there was no question who would run the company. His wife Anna stepped in to lead the business, becoming the first female CEO in America. She aggressively defended the company’s patents and marketed sweepers successfully throughout North America and Europe. In fact, in the late 1890s BISSELL gained its biggest fan in Queen Victoria, insisting that her palace be “Bisselled” every week.

Start off the cleaning frenzy with their number one best-seller the DeepClean Essential Carpet Cleaner/8852.

Perhaps, you would rather not remind her of household chores on Mother’s Day (even a belated one). Perhaps you would rather add beauty and function to her home. A gorgeous late Victorian dining table might do the trick! It perfectly fits a modern atheistic while being wonderfully antique.

Now, I know some moms would prefer to work on their fitness than deal with such chunky furniture. A home gym just might be more her thing. Can you believe such a thing existed in the 19th century? This is a drawing of a machine, or more pointedly, an exercise done on the rings. **There are no links for these two pictures.**

Some mothers loathe to sweat, but would rather work on the culinary side of healthy living . . . or not. It depends on what she’s making, but regardless of what it is, its bound to delicious! To assist her chef skills and show her gratitude in the 19th century way, why not gift her with a set of Mauviel Copper Pots! This company is, surprise-surprise, a 19th century establishment. Regency not Victorian!

In 1830, in a Normandy village called Villedieu-les-Poêles, which is located near the Mont-Saint-Michel [in France], Mr. Ernest Mauviel established the Mauviel manufacturing company.

Maybe your mother is more bookish; reader of classics and historical fiction, perhaps a little steampunk to liven up the usual repertoire. Nothing quickens the pulse quite like an affair of the heart. If this sounds like your mom, present her with a first edition of Leo Tolstoy’s Anna Karenina.

When the whole process of gift giving is too much effort or too many millions on your part, but you deign to give a gift card, treat her to a wonderful Spanish tapas/dinner at El Farol one of the oldest restaurants in New Mexico, complete with Flamenco dancing show. Ole!