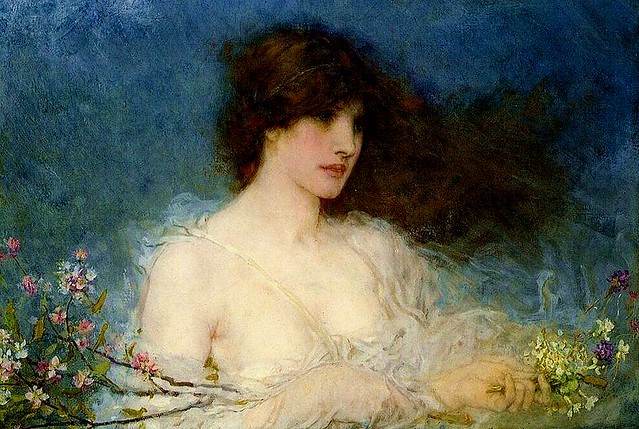 Many people are talking about the “failed” eclipse (so cloudy, they complained), others are throwing flowers in the air to celebrate the official-calendar arrival of Spring, despite the snow on the ground in many, many places around the globe. All hail the Spring Equinox! While the weather was fabulous here in Arizona, a cool 78 degrees Fahrenheit (about 26 C), the spring fashion trends are not as dramatically different from autumn. I was not thrilled with autumn offerings, so this is doubly saddening. There are some repeats and I will do what I can to dredge up 19th century allusions. Below are Six Spring 2015 Fashion Trends with a Victorian Twist . . .

60s Print and Silhouettes: This follows on the heels of Fall and the 1960s inspired swingy silhouettes and canyon-eque prints in “muted vibrant hues.”

My Perspective: Again, instead of using a Mod shape, I am presenting you with a 1860’s silhouettes. This time, with more unusual print mimicking a bit of what the “muted vibrant hues” of the current season. The bell shape, derived from the hoop skirt and crinoline was all the rage back then. The most exaggerated interpretations came from the South around the time of the American Civil war. This particular image is less-bell shaped than other examples. Personally, I like the skirt shape, it’s the shall top, I am not in favor of.

Denim: Still claiming Normcore, but away from the brown and tan men’s inspired drapings from last season. This version of Normcore is “slightly” more fitted and lighter weight denim, the slouchy look is still the ideal.

My Perspective: The image to the right actually comes from Levi’s Vintage 2013 Campaign. It fits the ideal modern look of head to toe demin slouch. Even the suspenders could claim a slight hipster edge. The hat would have to go and the pants. Bonus points for keeping the toting a mule around though! It is a perfect 1800s miner’s touch.

Neutrals/White: Follows the banality of most fall runway collections. The coat-hanger affect is the aim, with long unfitted shapes in clean lines. White shows up more on the runways than tan this season, so it gives the appearance of calm and serene.

My Perspective: White! Who does not love the look of white? For me the look is so crispy and very tea-time. The practicality, is a double edge sword. Lighter colors, as a rule, are difficult to maintain. However, it was very common to wear long sleeve light weight white dresses during the warmer months, especially in Arizona during the 19th century. The dress to the side is from around the 1880s-1900s.

Utilitarian Female: In 2015, this style is interpreted as military fabrics and colors, including camo, mixed with elements of lace and other more feminine pairings.

My Perspective: This trend was not mentioned in the autumn round up, but again it is nothing new. In fact, most of these trends have been reoccurring with great regularity for at least the past five years. The utilitarian/military look, also looks fabulous as a coat for a 19th century modern spin like the coat to the right. My Perspective: The dress is only partially leather, but it does have lace, or at least a lace-like effect. It is also a ball gown, as you can see. It lends a bit of 19th century formality to the ensemble. It is not in the coveted leather preference of the season, but we all know, black never goes out of style. Floral: Pretty straight forward, although a bit abstract in appearance.

My Perspective: Similar to the utilitarian trend, it is not really a trend but a seasonal (or even  through-out-the-year) standard. Nothing says classic feminity like blooms. Naturally, Victorians have this trend beat! Often times, they would bustle and adorn the dress with real flowers. Here is a more minimalist approach to a 19th century floral dress.

2 thoughts on “Present in Springtime”