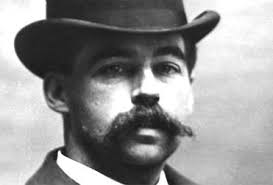 Last year, I discussed creepy gothic novels/novelists in honor of Halloween. This time, I am focusing on something far more unsettling: murderers of the 19th century. Each week, I shall include a vignette from the book 100 Most Infamous Criminals by Jo Durden Smith, followed by any other little factoids I have gleaned from random sources.

Today, we will unravel the mystery of  . . . Herman Mudgett, aka H.H. Holmes.

Herman Mudgett, alias H.H. Holmes, alias H.M. Howard, was an insurance swindler and a bigamist. But he was also one of the most prolific serial killers in American history. He liked to handle dead bodies.

He was born in Gilmanton, New Hampshire in May 1860 and certainly trained as a doctor, perhaps in New York. But he first came to fame in Chicago where, after deserting his wife and using the name H.H. Holmes, he took over a pharmacy from its proprietor, a Mrs. Holden, who’d been employing him until she disappeared. Business soon thrived; and in 1890, having married again, he started building a battlemented house-cum-hotel which became known as Holmes’s Castle.

Holmes’s Castle was no ordinary establishment, through. For concealed within it was a maze of shafts and chutes and hidden passages. There were also secret airtight rooms which could be filled piped gas via control-switch in the office, and a basement which contained huge vats. Only Mudgett himself knew the Castle’s overall design, for he hired different builders to work in isolation from each other, on their own small sections of the building.

It was completed and opened in time for the Chicago Exposition of 1893, which brought huge numbers of visitors to the city, many of them young women on their own. Having already, allegedly, go rid of several of his mistresses, Mudgett now had a machine that could deliver his female victims to death with maximum efficiency. After luring them from their rooms and attempting to seduce them, he would place them in one of the shafts giving onto a secret cell, and there gas them to death behind airtight glass panels. Then a chute would deliver their bodies to the basement, where he could dissect them at will, before tossing what remained of them into vats containing acid and lime.

In the year of the Exposition, Mudgett killed tens, perhaps hundreds, of young women and girls. But finally he got greedy. For among his victims were two rich sisters from Texas: and he decided, rather than stay in Chicago, to go after their fortune. So he set fire to the Castle, and claimed the insurance, and then, when the insurance company refused to pay and the police announced an investigation into the causes of the fire, he fled the city southward.

Once in Texas he ingratiated himself with the two sisters’ relatives and did his best to swindle them out of a $60,000 legacy. When this failed-and with the law close behind him-he took off on a stolen horse. He was finally caught in Missouri, using the name H.M Howard, and already charged there with fraud. But with the help of a crooked lawyer he was granted bail-and again he escaped.

He next appeared in Philadelphia, where a man called Benjamin Pitezel had been his associate, it later emerged, in a number of insurance scams. Pitezel, whose life had been insured for $10,000, was soon blown up in what seemed to be an accident; and Mudgett was one of those who identified his body. He had, of course, killed Pitzele himself; and when the insurance company paid the $10,000 to Pitezel’s wife, he disappeared with her and her three children. The children didn’t last long, though: they were later found dead, two of them in a basement in Toronto, Canada, and one in a chimney in Irvington.

Mudgett was finally arrested, along with his mistress, in Boston in mid-1895. He’d been tracked down by detectives who were after him not, oddly, for the crimes he’d committed in Chicago or Philadelphia, but for jumping bail in Missouri and horse-stealing in Texas-at that time a capital offence. The Philadelphia courts, however, had first crack at him, for the murder of Benjamin Pitesel, to which he’d readily confessed. Evidence in the trail, though, was also given my a Chicago mechanic, who told how he’d been hired by Mudgett to strip the flesh off three corpses at his Castle. It was only after this that the Chicago police began seriously to investigate that long-ago fire and found the secrets of Holmes’s Castle had contained. . .

Herman Mudgett was hanged at Philadelphia’s Moyamensing Prison on May 7th 1896.

The best selling non-fiction book Devil in the White City by Erik Lawson goes into more detail about H.H. Holmes’s story. Describing a handsome charming man, who did some truly disturbing things. I have read the book in question and what really made my skin crawl was, while he distanced himself from the actual killings (as opposed to hacking them with an ax personally or something of that nature), he would stand by the vent to listen to the women struggle. The desperation and panic would arouse him and only once he could compose himself would he go down to the basement for the dissections. *shudder*

Along the same lines, the book has been optioned as a movie that is due to appear in theaters within the next few years. None other than Leonardo DiCaprio will be playing the titular role. If you have not read Devil in the White City; I would recommend it, as it discusses two parallel personalities, the architect of the 1893 Chicago Expedition and H.H. Holmes. The gruesomeness of the crimes is a bit “off scene” and does not go into horror-novel tropes, but I assure you, you will know precisely as much as you would want, and the disturbing fates of known bodies. In other words, it is a true crime book, I could actually stomach, but the creepiness will still linger after the conclusion.