Autumn arrived this past Sunday! Can you sense the excitement in the air?! Perhaps it is the nip? Or in other lands, the changing of the leaves? The Harvest Moon? Or if you are like  me, you circle the date on your calendar and count down the days leading up to the subtle shift in fashions?

Just this past weekend, I purchased my Fall reticule, along with my costume for All-Hallows-Eve, but more on that later. On Sunday, I broke out my autumn scent and I am slowly morphing my “face paint” from my Spring/Summer palate, to warmer colors to mimic my Autumn make-up inspiration. Yes, yes, I realize this is most peculiar, but as you must know by now I live for Drama! (And not in that pesky modern connotation of emotional and personal issues, but in the way of theatrics, operas, and grand entrances!) Enough, about my idiosyncrasies, let us discuss the Fall 2013 trends and how a 19th Century Modern lady might introduce them into her wardrobe.

19th Century Make-Over: We talked at length last fall on the controversy surrounding real animal fur fashion purposes. With new synthetic alternatives available, I do not see the need to encourage the deaths of furry animals. So, I shall pretend we are all in agreement and this vignette refers to faux fur– Moving forward, a 19th Century Modern lady might don a fur coat similar to the one seen to the right; a much more traditional “oversized” cut. However, to add the dash of modernity, let us envision in a cobalt blue, an emerald green or some other vibrant hue of your choice. Tres chic, non?

19th Century Make Over: This trend precedes the 19th century! Women wearing men’s fashion is decidedly old news. The first really taste of this amongst the aristocracies of Europe was the Riding Habit; originally for gentlemen, it quickly was morphed into something more suitable and feminine for ladies to wear. Thus was born the wildly popular Redingote (derived from the French translation of the English ‘Riding Coat’).

19th Century Make Over: I adore this heavy nubby fabrics! Granted, I like heavy nubby fabrics to begin with. Perhaps, I am drawn to the structure which is apparently a masculine fabric tendency, while “feminine” fabrics tend to be softer and easily to drape. I was unsuccessful in my research for a photograph of said fabrics in women’s ware during the 19th century. It led me to believe this trend was rare; quite possibly the fabrics came about at a later date? (Please correct me if I am wrong! I did not research this aspect). Regardless, I found this Gothic Lolita inspiration to the right that fits both Modern and 19th Century sensibilities. 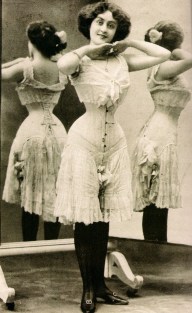 Modern Sense: This usually refers to Dior’s New Look campaign in the 1950s and the wasp-waist. Skirt suits are also synonymous with Mid-Century Modern.

19th Century Make Over: Well . . . the 19th century ideal was a cinched waist. The Victorian interpretation does not flare out so much at the hips, possibly because the hems reach the floor. So I consider this a more corseted look; which is just about any frock over the top of it. Does not get more “wasp-y waist” than the photograph at left; although I do know of a few.

19th Century Make Over: Pastels were all the rage during the Regency Period. Especially soft blues. This was predominantly seen on men’s coasts, but women wore the softer hues as well. I adore the pastel pea coats of Modern times . . . a nice blend between history and modernity. For visual sake, I incorporate a men’s image for variety, for I certainly can see a forward woman wearing such a jacket.