Monthly round up of pre-published historical fiction and 19th century non-fiction continues! Gleaning from insider information (a la professional journals of the library trade), I devised a list of new titles, many have not yet hit the shelves of the book seller’s. Now is your chance to pester your local librarian or book store employee to order these titles. All terse summaries are verbatim from their sources. At this point, I cannot with any authority recommend one book over the other, but I will certainly tell you which ones I am most eager to read! Your July selections are . . .

The Glass Ocean by Lori Baker

A tall and newly orphaned daughter of a glassblower recounts the circumstances of her abandonment, the weight of her inheritance an her parents’ stained marriage in Victorian England, marked by her father’s efforts to render previous unseen sea creatures in glass.

Fleeing her violent master at the side of legendary abolitionist John Brown at the height of the slavery debate in mid-19th-century Kansas Territory, Henry pretends to be a girl to hide his identity throughout the historic raid on Harpers Ferry in 1859.

The Purchase by Linda Spalding

Shunned by his Quaker community for marrying a servant girl, Daniel Dickinson pursues a new life on the early 19th-century Virginia frontier, where his family’s values are tested by the challenges of homestead life and the moral dilemma of slave ownership.

A Fatal Likeness by Lynn Shepard

Commissioned to negotiate the release of papers linked to Frankenstein infamy, London detective Charles Maddox, whose uncle remains haunted by an unsolved mystery surrounding the Romantics literary movement, is roped into a gothic-tinged case that places him in the path of such luminaries as Lord Byron and Mary Shelley.

The great-great-great grand daughter of Charles Dickens details the life of his daughter Katey, a well-regarded portraitist, describing her experience during her parents’ breakup, her two marriages and her friendship with William Thackeray and George Bernard Shaw.

A culture portrait of everyday life in Regency England and the world of Jane Austen draws on a rich array of contemporary sources including previously unpublished manuscripts, dairies, and personal letters to depict how everyday people shared experiences ranging from marriage and sexuality to health care and religion.

O My America!: Six women and their second acts in a New World by Sara Wheeler

The Manor: Three centuries at a slave plantation on Long Island by Mac Griswold 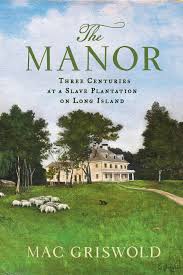 Based on years of research and voyages that took the author as far as West Africa, this compelling history of a Long Island plantation, spanning three centuries and 11 generations, reveals the extensive but little known story of Northern slavery.