Steampunk Scientist by Enkidi–Click on the image to view some amazing steampunk art!

Continuing with our exploration of the manly arts of the 19th century; one must admit you cannot mention the Industrial Revolution without machines! While, there were certainly women who contributed to inventions and science throughout Human history, this month, I am focusing on the men. *Tips hat to male readers* Some of us, know a gentleman who is obsessed with the latest technology, writes code or apps, hacks the Pentagon, and has misplaced his Google Glasses . . . somewhere. . . around here . . . is sure of it . . . These creative minds engineered an empire! If you know a similar fellow, he would have definitely been in good company during the 19th century. Could you imagine what the house might looked like? Machines everywhere! They might look clunky to our Modern eyes, but they were the wave of the future! Only forward thinking men (with very accommodating wives) could have such luxuries in the home. Personally, my own father is a retired engineer and it does not take a stretch of imagination to envision our “19th century selves” would have motors and gadgets laying around in almost every room.

Below are eight “manly” inventions of the 19th century. How many can you identify? Would you have had any in your “19th century home?” 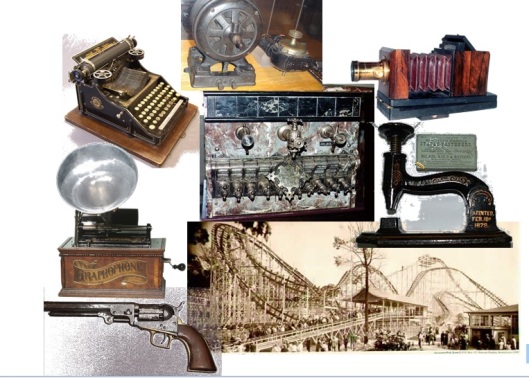