What is Man without his most trusted companion? Alone, perhaps. Yet there is an undeniable bond between a boy and his dog. There are few circumstances when Gentlemen will excuse the tears of another man, one of those rare times is the loss of a dog. The canine means that much. What must a man do for the love a dog? Nothing. Absolutely nothing. That is precisely the point.

Incidentally, it did not stop Man from trying his hand at creating the perfect companion; one suited for his lifestyle and his needs. Gentlemen became breeders and breeders gave rise to a legacy. Numerous canine breeds developed in the 19th century, when everyone and their father was set out to make “their designer dog” or discovered one. I was quite surprised by many of them. Here is a list of ten widely recognized breeds that got their start in the 19th century (as per the AKC histories).

Afghan Hounds were discovered by the Western cultures 19th century Afghanistan. First documentation on this dog comes from India to England in 1809. They were not only the King’s hunting dog, but the layman’s herding and guard dog.

1870s a Bostonian breed an English Bulldog with an inbred white English Terrier. About twenty years later, a group of thirty or so fanciers refined the breed as we know it today. The gentle disposition has earned the Boston the nickname “the American Gentleman.” –Looks rather fetching in his built-in tuxedo. He is just missing a monocle and top hat. 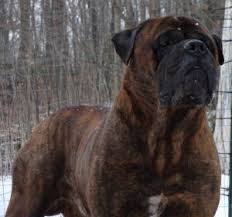 Ah, the 19th century poacher’s worst nightmare; the bullmastiff! The first record of the breed was noted in 1860s. They were meant to protect the Gamekeeper from getting killed by the poachers or hold down the thieves without mauling them. So with some clever breeding, England produced a dark (now since lightened to fawn colored) silent-on-approach beast that could attack on command. Thus, its nickname the “Gamekeeper’s Night-Dog.”

In 1901, Mr. Burton of Thorneywood Kennels brought to the show one Night-Dog (not for competition) and offered any person one pound who could escape from it while securely muzzled. One of the spectators who had had experience with dogs volunteered and amused a large assembly of sportsmen and keepers who had gathered there. The man was given a long start and the muzzled dog slipped after him. The animal caught him immediately and knocked down this man the first spring. The latter bravely tried to hold his own, but was floored every time he got on his feet, ultimately being kept on the ground until the owner of the dog released him. The man had three rounds with the powerful canine, but was beaten each time and was unable to escape.

In 1807, a British shipped was wrecked off the coast of Maryland. Two of the survivors were canines who went ashore and mated with the local dogs. . . . well, not immediately after climbing on shore! . . . Some time after. Their bloodlines immediately improved the duck-hunting stock along the Bay. Owners took notice and introduced a few other breeds culminating in the Chesapeake Bay Retriever. It is one of the few breeds to be created and developed in the United States.

While the shepherd dog has been around for eons, studbooks only came about during the 1800s. Queen Victoria took a liking to the breed when she visited Balmoral Castle, increasing its popularity. The physical and temperamental standards of the Collie were perfected in 1886 and have not changed since.

This is My Suitor’s most desired breed. The breed originated in Apolda, in Thueringen, Germany around 1890, taking its name from its creator Louis Dobermann. The Dobie is a mixture of ancient shepherd, Rottweiler, Black and Tan Terrier, and German short-hair pointer. Who knew?

The breed was founded in 1899, making it the youngest on the list, by Captain Max von Stephanitz. Leave it to the Germans for their intensive development to create an superb working dog. Goodness, what a dog! Easily trained, with remarkable retention, and known for its adaptability to specialty circumstances.

The most complete record of the Golden’s origin come from a log book from the 1840s by Scotsman, Dudley Marjoribanks, the first Lord Tweedmouth (If that is not one of the most pretentious sounding names . . .) He passed along his breeding knowledge through the generations to develop the Golden Retriever. However, the breed was not officially recognized until 1913.–I am quite surprised by this inclusion. I thought Goldens were an older breeder.

Is considered a self-colored dog. Solid-color with no “flaws” of white or black hairs. The general formula was English Setter + Spaniel + Pointer + (a dash of) Golden=Irish Setter. However, those origins are still up for debate as to what makes the Irish solid red. This took some time to achieve but was perfected in the early 1800s.

. . . it is a matter of record that in 1812 the Earl (of Enniskillen) would have nothing else in his kennels.

This inclusion surprised me the most. I thought, surely Yorkies were an ancient breed. Yorkshires were the fashionable Victorian accessory, similar to the Chihuahua today. The record books show a Yorkshire Terrier at a dog show in 1861. It was not until 1872, the first Yorkie born in the United States. Despite its pampered image, Yorkies are still Terriers and may be extremely feisty little creatures.