No, you are not lost. Yes, I changed my header/banner to look more like a calling card. I finally figured out how to do this. I created it on a ridiculously basic program, had some assistance from My Suitor, since I can be such a Luddite; and I reached 100 followers on 19th Century Modern this past weekend . . . I thought it was rather fitting and time for a change.

There is a curious trend that runs through Victorian portraiture. I noticed it decades ago, but never given much thought, until I took a course in photography in secondary school. Pleasing angles and lighting vary from subject to subject and from setting to setting. However, there tends to be Universal Truths in Art. The Golden Mean and chiaroscuro for emphasis of importance are just a couple. In figurative art, images using human subjects, the rule of ¾ position is the most pleasing in portraiture. Artists hold this angle best captures the subject with a mix of light and shadow to contour the face. They also reason it slims the visage and sometimes politely hides any defects. Whereas a full on shot of the person’s face can appear too wide. Light when aimed straight on “flattens” the face, making it seem two-dimensional. Hence, if a straight on composition is being used, the light is off to the side to cast pleasing shadows and create angles.

It is also said, like a painting, photography was supposed to portray a moment where people were unaware the artists were present. It appeared more natural this way, even if it was anything but. If the subject did not stare into the frame of reference, it looked more demure and organic. If the line of sight was more direct, the eyes were meant to look bored or lost in thought beyond the artist and not to “acknowledge the viewer.” Staring directly at the viewer, whether it is a curious gaze or come thither expression, was quite bold, risqué, and a bit cheeky.

The profile position is a bit flattening in the same way a full on stance would be, but a hint more angular. It does not produce lovely three-dimensional contours indicative of a ¾ perspective. It is somewhere between the two in desirability.

As the notion of beauty fluxuates over time, so does the reaction to these profile images. Many photographs in the 19th century are of “strong Anglican profiles,” meaning more or less the nose and chin placements. Now, I am not advocating or promoting certain beauty ideals and standards, but reiterating strictly from an artistic perspective. . .  Artistically, having the tip of the nose and the tip of the chin line up is considered “Classical beauty proportions,” in the vein of Grecian and Roman antiquity. In reality, most people have a longer nose. It is these profiles that crop up more often than not during the Victorian era.

With this background knowledge, it is curious to me why there was such a rise in popularity of profile portraits during the 19th century. Part of the popularity of the profile stems from the rise of silhouettes. Silhouettes were a cheap and simplistic way to take someone’s likeness, but I shall save that discussion for another time. After viewing various profiles and recovering from mild surprise at the un-Classical lines before me, my sentiments were “Good for you!” Even still, some photographers, would only suggest a profile position for more Classical subjects.

Center shot, with light slightly to side (note shadows on left side). Some consider positioning the visage like this makes it too wide or “fat face.”

3/4 view, not looking at the camera, also the body language is “demure,” though I think she appears dejected

Almost straight on view, direct eye contact, “bold as you please,” The tilt of the head adds a bit of visual interest.

Queen Victoria, during her Diamond Jubilee. Stronger nose, than chin, but body is in 3/4 view 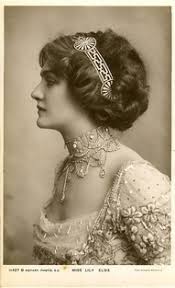 Beautiful Classical proportions! Is it just me, or does she remind you a bit of Ellen Love from the show Selfridges?

Almost full body profile of a gentleman. I believe his facial hair is assisting in his almost perfect Classical proportions. . .